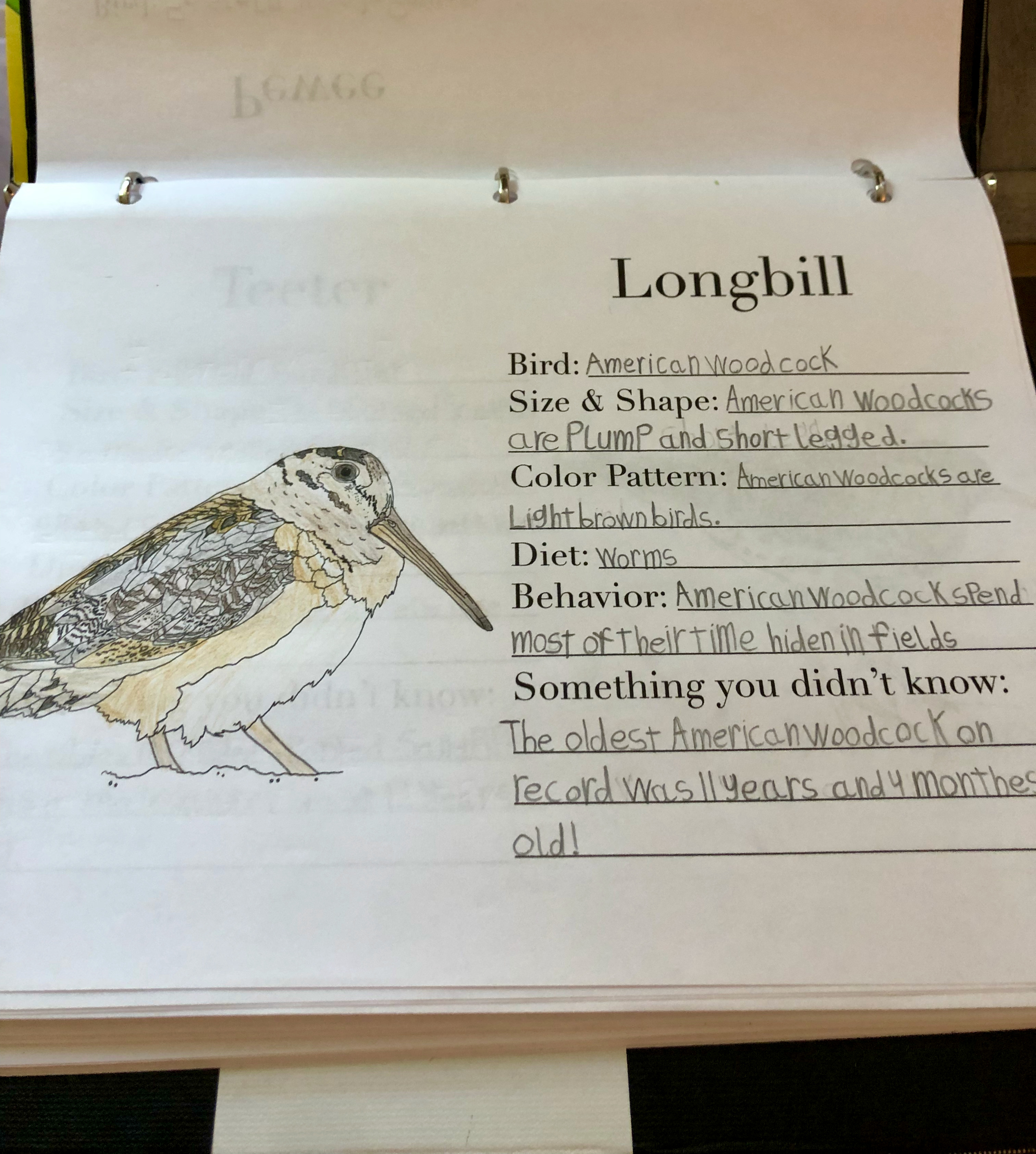 Here we come to a beloved chapter in the Burgess Bird Book, chapter 9. We fell in love with Longbill, who’s Writing Page you can see above, very quickly and I’ll tell you why… You’ll have to tell me yourself if you can resist his irresistible moves when you see them here:

This rocking back and forth dance is a very common behavior for Woodcocks- if you look for more videos, you can find some pretty funny ones set to music.

Burgess highlights another Woodcock characteristic, which gives Longbill his name. Peter Rabbit knows how Welcome Robin hunts for worms, but he is puzzled by Longbill’s method. To Peter, it looks as if Longbill sticks his bill into the ground with no plan. He asks Longbill:

“Even if you know there is a worm down there in the ground, how do you know when you’ve reached him? And how is it possible for you to open your bill down there to take him in?” asked Peter.

Longbill chuckled. “That’s easy,” said he. “I’ve got the handiest bill that ever was. See here!” Longbill suddenly thrust his bill straight out in front of him and to Peter’s astonishment he lifted the end of the upper half without opening the rest of his bill at all. “That’s the way I get them,” said he. “I can feel them when I reach them, and then I just open the top of my bill and grab them. I think there is one right under my feet now; watch me get him.” Longbill bored into the ground until his head was almost against it. When he pulled his bill out, sure enough, there was a worm. “Of course,” explained Longbill, “it is only in soft ground that I can do this. That is why I have to fly away south as soon as the ground freezes at all.”

The amazing thing about these two specific characteristics is that together they help the Woodcock hunt and capture worms. As allaboutbirds.org tells us: “The American Woodcock probes the soil with its bill to search for earthworms, using its flexible bill tip to capture prey. The bird walks slowly and sometimes rocks its body back and forth, stepping heavily with its front foot. This action may make worms move around in the soil, increasing their detectability.”

Maybe next time I go to the grocery store, I’ll try this approach in getting my food. 😂

For more information about my Burgess Bird Writing and Coloring pages check here: