The American Kestrel is truly a beautiful bird. Burgess describes him like this:

Very trim and handsome was Killy. His back was reddish-brown crossed by bars of black. His tail was reddish-brown with a band of black near its end and a white tip. His wings were slaty-blue with little bars of black, the longest feathers leaving white bars. Underneath he was a beautiful buff, spotted with black. His head was bluish with a reddish patch right on top. Before and behind each ear was a black mark. His rather short bill, like the bills of all the rest of his family, was hooked.

Killy is the smallest falcon in North America. You can tell they are birds of prey when you how they hunt. Find more about their interesting abilities here:

There is an American Kestrel at one of the nature centers near us and it is amazing to go and see him in person. And knowing that interesting fact about their ability to hover in place is really helpful for identifying them in the field. I would frequently see one doing just that on my morning bike rides.

Here is some more of what we gathered about the American Kestrel:

Until next time, enjoy birding <3 Kate

For more Burgess Birds in Detail and our Burgess Bird Pages, stay awhile and look around.

This Spring, I took a break from posting in order to observe and enjoy the Spring Migration. It has been absolutely amazing to meet the different birds that pass through our area on their way North. Some of the highlights of the Spring Migration this year were seeing: Rose-breasted Grosbeaks, SOOOO many Warblers enjoying the buds of our trees, Jenny and Mr. Wren coming up to make a nest in one of the birdhouses in the garden (they are still here!), the beautiful Baltimore Orioles we were able to entice into our yard with our Oriole feeder, seeing Hummer the Ruby-throated Hummingbird come back, and a Summer Tanager. It really has been a delight and I’m sure I’m forgetting some of them.

Picking up where we left off, it’s always a great delight to me when a bird’s name mimics it’s call. That’s exactly what the Northern Bob White does. Check it out:

My kids and I love to mimic this call, and because of that I know it will be easy for them to identify it in the field. They are also very distinguishing when it comes to their size and shape. Listen to Peter Rabbit’s take on the Northern Bob White:

As Peter looked at him it came over him that Bob White was the plumpest bird of his acquaintance. He was so plump that his body seemed almost round. The shortness of his tail added to this effect, for Bob has a very short tail. The upper part of his coat was as handsome reddish-brown with dark streaks and light edgings. His sides and the upper part of his breast were of the same handsome reddish-brown while underneath he was whitish with little bars of black… Altogether he was a handsome little fellow in a modest way.”

Have you had the pleasure of meeting this modestly handsome fellow in a field?

Check out our Burgess Bird Coloring and Writing Pages! 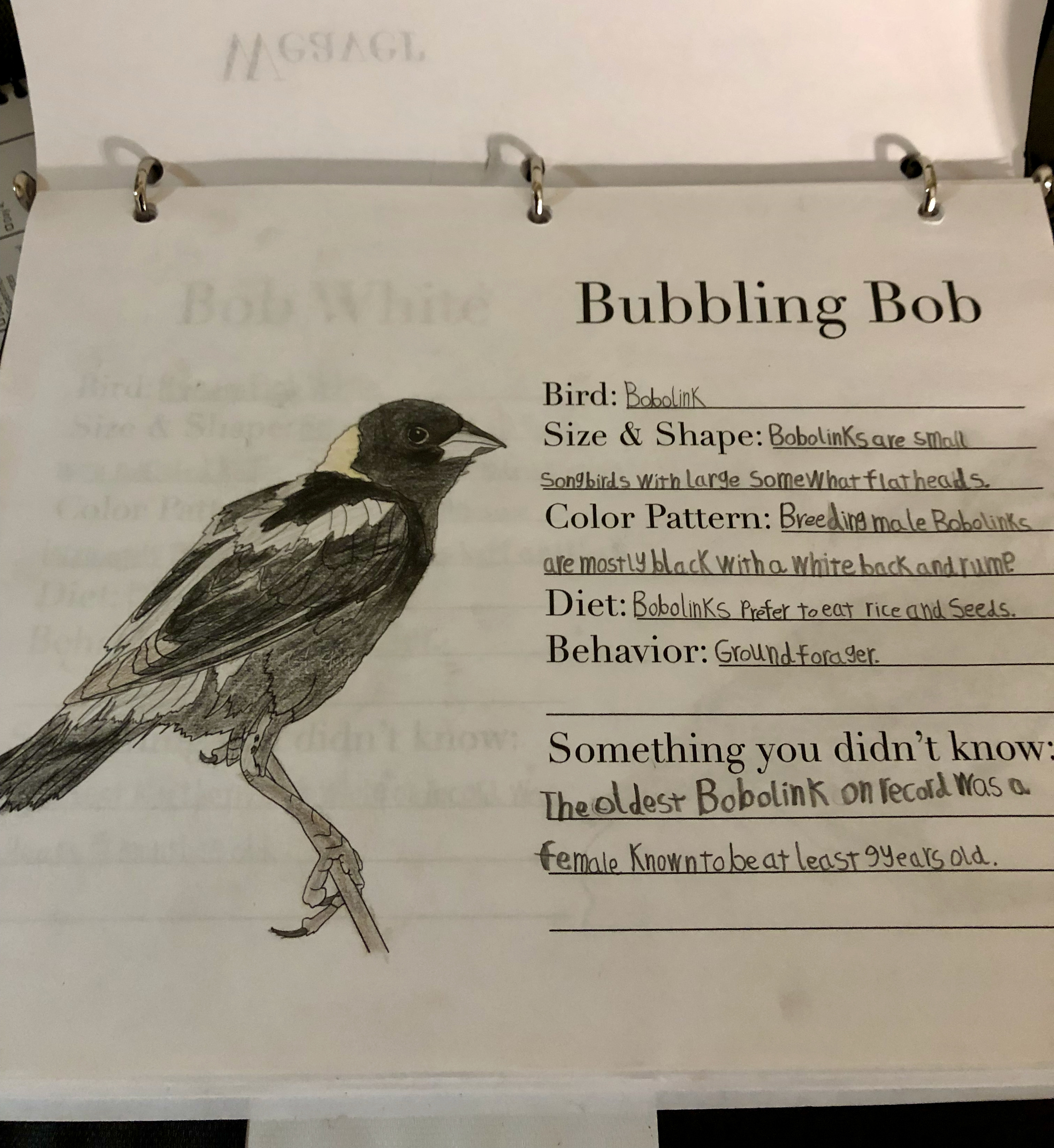 What a fun sentence full of alliteration: Today our Burgess bird is Bubbling Bob the Bobolink! Writing that this morning is a great start to the day.

Bobolinks… ever heard of them? Unfortunately, this is a bird that is getting harder to find.

If you are hoping to ever spot one you should look in the grasslands or abandoned fields around you. They can be seen and heard around those long stalks of grass. Within those fields, they build their nests on the ground and when reading about them in our Burgess Bird Book we find that Jimmy Skunk is very interested in Bubbling Bob’s nest. Thankfully Bubbling Bob and his wife are very clever and lead Jimmy Skunk in the wrong direction to protect their nest.

Here is a great clip of a male Bobolink singing and I love it because you can see his back as he hops along the fence line. The Cornell Lab adds that Bobolinks are the only North American bird with black underparts and sections of white on their back calling his pattern a reverse tuxedo. (source)

Until next time, keep on birding! <3 Kate

Growing up in Texas, I had no idea about Red-winged Blackbirds, but that doesn’t mean they weren’t there. It wasn’t until I moved to Illinois that I saw one for the first time. They are so prevalent around us and I have a few stories to tell about them because of their habits and characteristics. They are not usually at the top of the average “Favorite Bird List,” and probably don’t make the list for most people.

Last Fall, my family and I went to the Lincoln Park Zoo in Chicago and witnessed one of their less favorable characteristics. They can be quite aggressive when they want food. A lady was walking with her family, pushing the stroller, with a box of cheese crackers in her hand. Her little boy was walking and eating some of them when all of a sudden a Red-winged Blackbird swooped in to try and take them from the little boy. The mother started defending her son from the bird, but it was no small feat because the bird was going back and forth from the cheese crackers the little boy had and the ones left on the stroller. If you’ve ever suffered from a bird attack, you’ll know it’s actually quite scary because of the sound of their wings and the startling occurrence of their approach. Thankfully after a few minutes of fighting the bird away, the family could continue walking through the zoo in peace, but they were flustered to say the least.

We often find Red-Winged Blackbirds picking over our yard during the Summer and Fall, seeing a whole cluster of them. It’s quite interesting to see their patterns, especially because the females have a very faint outline on their shoulders that matches the male’s red and yellow shoulder. I love the way that Burgess describes Mrs. Redwing:

Peter couldn’t help thinking that Old Mother Nature had been very unfair indeed in dressing Mrs. Redwing. She was, if anything, a little bit smaller than her handsome husband, and such a plain, not to say homely, little body that it was hard to realize that she was a Blackbird at all. In the first place she wasn’t black. She was dressed all over in grayish-brown with streaks of darker brown which in places were almost black.

Lastly if you are wondering why they are so prevalent, it’s because they have 2-3 broods every breeding season and they are polygamous with males having a few different partners, hence the territorial displays of many males.

What do you think of Red-winged Blackbirds?